Sustainable Flatbush brings a fun and delicious twist to being green at the Cortelyou Greenmarket on Sunday, December 16 from 11am to 2 pm, with a demonstration of our Bike Blender and Solar Oven!

Ditmas Rides this Friday – in costume!

Dress up yourself, dress up your bike and come to our next Ditmas Ride this Friday (10/29) at 7:00 pm. Of course you can join us if you or your bike are not dressed up. We will meet in front of the Qathra Cafe on […]

Bike to Work from Flatbush this Wednesday!

Flatbush resident Deb Kapell invites YOU to join her Bike to Work ride this Wednesday! END_OF_DOCUMENT_TOKEN_TO_BE_REPLACED

An Evening of Streetfilms on June 10th!

Sustainable Flatbush invites you to celebrate BikeBKLN by visualizing a future of Livable Streets!

Okay, now I can speak from first-hand experience: Summer Streets, New York City’s experiment with creating a car-free haven for pedestrians and cyclists, is truly fantastic!

For your viewing pleasure!

This is history in the making, folks. As Gil Peñalosa says in the film, Mayor Bloomberg and (especially!) Department of Transportation Commissioner Janette Sadik-Khan deserve credit for having the guts to try something new. END_OF_DOCUMENT_TOKEN_TO_BE_REPLACED

Due to a MOST unfortunate prior commitment I was unable to attend the historic kickoff of NYC Summer Streets on Saturday… but I did manage to grab a photo (camera phone, sorry!) of the last few precious car-free moments. Union Square, car-free!

You may have already heard about NYC Summer Streets, the car-free celebration coming up in August. On the 16th we will be hosting a “feeder” ride from Flatbush to join the party, stay tuned for details! For now, enjoy this promo video courtesy of our […]

I’ve been watching the buildup all day on Streetsblog in anticipation of this exciting announcement:

Emulating similar experiments in Paris, London, and Bogotá, Colombia, New York City will close off to traffic a 6.9-mile route from the Brooklyn Bridge to East 72nd Street on three consecutive Saturdays, giving New Yorkers to a chance to explore and enjoy “car-free recreation corridors” — well, for six hours a stretch, at least. (NY Times)

“We anticipate that hundreds of thousands of New Yorkers and visitors will take advantage of streets temporarily opened for recreation,” said Mayor Bloomberg. “We hope the Summer Streets experiment will become as much a part of the New York experience as strolling the Coney Island boardwalk, participating in the 5-borough bike tour, or listening to the Philharmonic in the park.” (NYC press release, via Streetsblog) 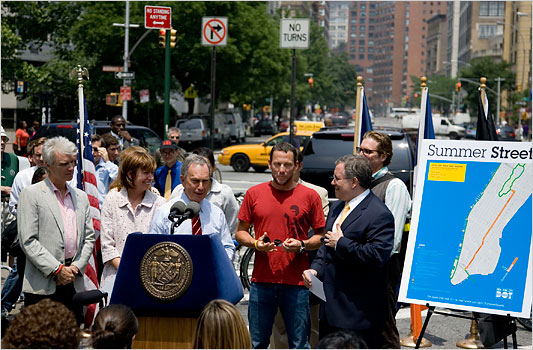 Yes, that’s David Byrne and Lance Armstrong bringing some celebrity power to the proceedings. The dates are August 9th, 16th and 23rd — can’t wait! For an idea of how fun this will be, check out the Bogota’s Ciclovia on Streetfilms. Next… BROOKLYN Summer Streets!!

I [Heart] the Slow Bicycle Movement

Another brilliant campaign from the Copenhagen Bike Culture blog. In that Nordic mecca for stylish cyclists, a relaxed bike ride to work, school, shopping, or socializing is just everyday transportation (no Lycra allowed!). I’ve already mastered the “Slow” part, but full membership seems to require […]